Translations of this page?:
Trace: • about

How does Bolidozor network work

Bolidozor is a network designed for meteor observations on different level of professionalism. It uses observation stations located either at amateurs, volunteer or at professional or public astronomical observatories. The map with locations of the stations can be found at Astrozor.cz website.

The network brings revolutionary approaches in meteor observations and potentially in detecting their fragments' impacts. At the current stage it focuses mainly on the obtaining the trajectory based on the radio reflections from their ionised trails in combination with visual observations. Other measuring modalities and analysis methods are planned in the future. 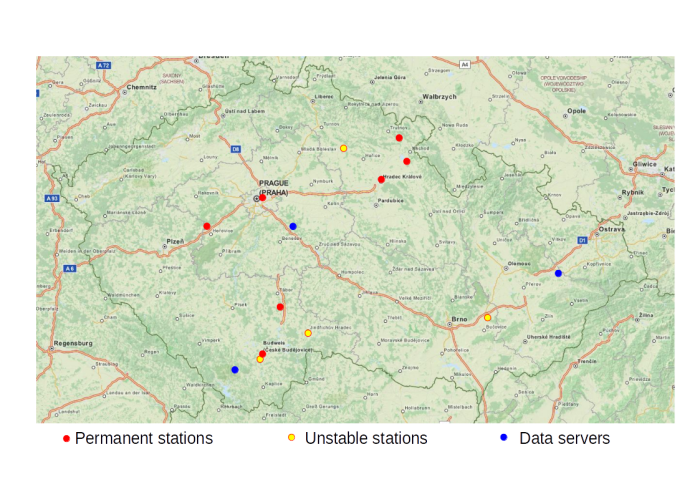 The meteoroid passage through the atmosphere causes, apart from a classical optical phenomena (meteor) - often visible by a naked eye, a number of other phenomena, which can be measured on the ground and used for scientific processing. Examples of such phenomena include: radio waves reflections, optical emissions, radio emissions from ion recombination, spreading of shockwave cause by hypersonic flyby. The shockwave, for example, is able to reach distances of orders of hundreds of kilometres, as it is damped by the viscosity of air only. Thanks to that, ground pressure sensors are able to measure it, thus obtaining further informations about the flyby of the body.

In case of searching for fragments (meteorites), it is important to determine the dark path of the falling meteorite, especially in case of less massive bodies, whose flyby in influenced by tropospherical currents. This problem should be solved by a measurement conducted shortly after the detection of flyby in the area of anticipated impact. This measurement may be carried out for example by an automatic baloon probe launch.

Concerning the impact, it is important to transport the meteorite to laboratory for further analyses as fast as possible. The problem may be solved by air transport, thanks to its high speed - unmanned aerial vehicles present a feasible option.

The whole cybernetic system consisting of devices for meteor detection, meteorite search, analysis and transport to laboratory requires interactive planning and a use of advanced algorithms for signal processing.

If a real-time solution to the above-mentioned steps would be found and if it would be possible to expand the system outside the Europe, then, apart from the obvious scientific contribution, it could provide institutions (such as astronomical observatories) with an interesting interactive and popularising output of trajectories and other events leading to tracing the meteorite.

The monitoring of meteors and the possible tracing of meteorites pose an interdisciplinary problem, that requires experienced professionals in the fields of astronomy, space mechanics, meteorology, aerodynamics, radio-electronics, navigation, geology and other. Such requirements make it almost an ideal educational project, with participating institutions form elementary schools to universities, including professionals, who can use the data further in research. The network is thus suitable for researchers solving many partial problems of basic and applied research.

Bolidozor's radio sub-system detects meteors using a method know as forward-scatter. Currently the GRAVES radar is used as a transmitter, transmitting a continual power of several MW on frequency 143.050 MHz.

To receive the scattered signal, we use MLAB RMDS stations. The sensitivity of such station is, when using a standard configuration of software, -135dBm and dynamic range is limited by a dynamic range of used sound card. The usual sampling is 16bit@96kHz. A simple GroundPlane aerial station with the above-mentioned configuration detects on average around 1000 meteors per day.

The stations are time-synchronized by GPS signal with 65ns (1σ) accuracy. The signal is also used to check the state of local oscillators on stations.(Oscillator frequency is measured with 0.1Hz resolution, the accuracy of measurement is based on the accuracy of the time synchronisation).

Data outputs are in FITS format with RICE compression and they are either as sampled signals or as pre-computed spectrograms. All measured date are publicly available on data server. Meteor recordings are created based on the measurement of signal intensity in frequency domain, where the reflected signal is expected. All signals above the threshold intensity are recorded.

From the astronomical point of view, Bolidozor network contributes to gaining quality data about meteors, even under conditions that make other methods not suitable (daylight, low visibility, unsuitable weather conditions etc.).

Apart form a direct contribution to basic research in the field of interplanetary matter, other outputs include algorithms for signal processing - radio and electronic problems in Bolidozor network are similar or identical to the tasks addressed by modern radio-electronics.

Current radar and navigation techniques often use passive and multistatic radio systems, where transmitters and receivers are separated, usually by location as well. Such systems have widespread application in military and civilian technology (e.g. air traffic control), taking advantage of their strong points such as higher reliability thanks to redundancy or better coverage thanks to redistribution of reflected energy. Technically, these problems are similar to radio navigation - from the point of view of energy and signal interference, it is more specifically an issue of satellite navigation.

All of such radio systems are technically mainly limited by current algorithms for signal processing. Multistatic systems require numerically demanding statistical calculations, which are furthermore being done in real-time and with signal containing high proportion of interference. In order to effectively use the multistatic signal, there have to exist algorithms able to detect objects covered by interference and using data from multiple stations.

Bolidozor network makes it possible to test such algorithms for objects traveling at hypersonic speeds - current radar systems are not yet well suited to detect such object. Further research in the field of new methods for determining the position of flying objects using radio signals is necessary.

Due to the above-mentioned weak points in project realisation, the development of network focuses on improving the data quality by upgrading the radio receivers' construction. The goal of this step is to overcome current professional measurements based on similar principles and to eliminate the influence of station operator on data quality.

The next step will be an improvement of current detection methods and development of algorithms for meteor trajectory calculation in real time. It is possible that these new algorithms will require high level of parallelisation and a use of special computational hardware. In such case, it will be advantageous to build on the knowledge from previous GNSS receivers' development.

The forward-scatter method of radio detection is known since the 1960s. However, due to technical limitations and difficulties in signal processing, it has never been developed into method for calculating meteor trajectories based on observed data. Such observations were always limited to counting the meteors' flyby and mapping the flow of meteoric showers, whose radiants were mostly determined form optical observations.

It is important to understand that both of these methods are prone to strong selection bias and methodological error. Radio observations, for example, were not able to associate a particular meteor with a shower - they only gave information about the counts. Optical data enabled a very accurate trajectories measurement and thus were able to associate meteors with their shower. On the other hand, they were not able to determine exact time of flyby. Furthermore, optical observations have strong selection bias due to daily cycle of observations - such cycle can be seen on following graph based on Bolidozor network data: 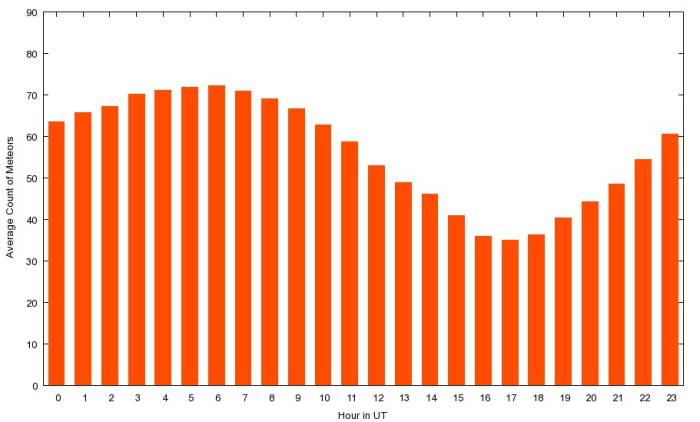 It is obvious that most meteors are passing thought the atmosphere in the morning, during the time when optical observations are not possible or only detect large meteors. Optical bolide networks are usually not able to detect even large meteors during daylight, ones that should theoretically be observed despite the light. The reason lies in the complexity of processing the daylight images, that makes it difficult to detect meteors. In such cases, the radio observation can serve as a trigger for optical data recording and their possible later analysis.

A possible new benefit of Bolidozor network was revealed right at the beginning of its existence, where there were only two functional stations. The following image is a historical recording of meteor reflection from two stations. Time axis runs horizontally from left to right.

In the left part of the image, a reflection from shockwave cause by meteor flyby can bee seen - this event can be easily distinguishable, as it is accompanied by a doppler shift, followed by a more or lest static reflection from the ionised trail.

Left parts of pictures also show time differences of the flyby from the point of view of each station (the picture is aligned according to time stamps). We can see that the doppler shifts of shockwave reflection are different for each station and can thus deduce that the meteor flew from north to the south under angle, which could possibly be determined from doppler shifts if we had recording from more stations.