There are some already existing projects that can used in the process of data processing.

There already exists a network dealing with similar problem called CMOR, which observes meteors using transmitter and several receiver stations. Such approach is, however, not really suitable for Bolidozor network.

The most realistic solution seems to be a calculations using spatial coordinates of meteor’s head-echo. This approach has already been tested Miguel A. Vallejo, EA4EOZ 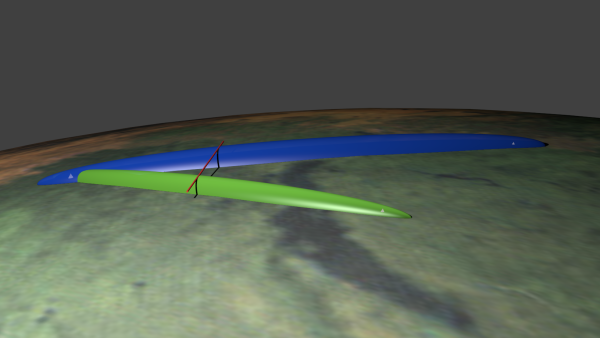 Aircraft navigation VOR transmitters are one of the options, how to see the radio reflections.

To calculate the energy balance, Jakub Kákona has created a model of signal.

When processing data from VOR beacons, it is necessary to solve a problem of lower radiated power of transmitter. Lower transmitter power causes that the intensity of received signals is often below the noise level.

In case of positive detection, model parameters to calculate the replica have to be extracted from the signal.

Calculation of path will be carried out using several methods. First is the multilateration based on different records’ time shifts on individual stations. Time shifts have to be obtained by time correlations of recorded data. This correlation can be carried out either in signal time-space or using Fourier transformations. In both cases, it is first necessary to isolate the useful signal of meteor in the noise.

Next step is a measurement of doppler parameters of meteor’s head-echo, which determines the inclination and speed of the path.

Overall, the path calculation implementation will be carried out in two steps:

DVB-T signal has an advantage compared to VOR beacons in that it is broadband. This feature can help to improve the accuracy of measurement. However, the system transmits in multiplexes, meaning that there is a transmission of an identical signal from several places at once - causing a complication.

Decesion process and search for fragments

Should a scripting language be used to describe the ROS process?

A Marcus Leech group, Science Radio Laboratories has prepared a signal schema for GnuRadio that enables a processing of more channels at once.

A good solution for testing is an interactive iPython environment where you can directly try individual parts of code and process data.

Its basic installation in Ubuntu can be carried out by installing the following packages:

Afterwards, you can run iPython from the command line:

In order to get acquainted with Python language you can use Codeacademy.

There are several already existing iPython notebooks for data processing from Bolidozor network - you can find them at: http://meteor1.astrozor.cz:8080/ More specifically for example Histogram of frequency shift of meteors and Visualisation of meteor trails from Meteor Observer Mobile aplication.

Scripts on server are reloaded every 5 minutes with runipy programme.