Translations of this page?:
Trace: • meteor-observer 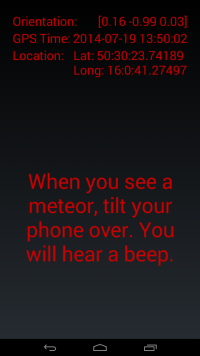 An application for reporting a visual observation of meteors that runs under a mobile telephone with OS Android. Meteor’s path parameters are obtained by showing the meteor’s paths as the mobile’s user remembers it (angles are measured by magnetometer and accelerometer in the phone). Application allows to document both systematic and sporadic random meteor observations.

Because the application for meteor observation uses internal sensors of a mobile phone to measure and record path’s data, it is necessary to initialise and calibrate them before an observation itself.

The application obtains information about an exact time and location from data provided by GPS. It is therefore necessary to turn the GPS on before the observation and let it initialise itself, until it has a stable fix. To speed up this process you can use a support application GPS Status that runs on background when the GPS is on and download AGPS data from Internet to help the GPS to get a position.

Star the application Expa Observer and move your mobile phone in space as if you were drawing eights in such way that the mobile goes through all the possible positions. The slower you will move the mobile phone and the longer time you will spend doing this procedure, the better calibrated the internal sensors will be. The resulting records of meteors’ paths will be more accurate. It does not matter if, during the calibration, you will record any paths - these records can easily be deleted in menu ‘records editing’.

The above-mentioned calibration calibrates the extreme values of mobile’s magnetometer and accelerometer and compares the relative rotation of these sensors.

In settings menu, you can change a randomly generated anonymous identifier for your nickname. In this way, individual observers can be identified and eventually be rewarded for their contributions.

During an observation, there is a running application Expa observer with a red screen (showing a red clock on the screen) on a mobile phone. You can carry your mobile phone in this regime in your packet as usual. We also recommend to set a relatively high volume of system sounds so you can hear a beeping sound announcing changes of application status.

If you see a meteor and want to record it take the mobile phone out of your pocket, hold it in a horizontal position for a while and then quickly turn it by 180 degrees with one hand. At this point, the time is recorded. At the same time you will hear a beep announcing this event.

Next, aim the phone on the begging of the meteor’s path so its edges on its long side will overlap. At the same time a line between the path’s beginning and your eye should point through both of these corners. Hold the phone for a while until you hear a beep announcing the recording of the beginning of the meteor’s path. Using the same procedure, aim to the end of the path. You will hear another beep and the whole meteor path is recorded.

In the record’s menu you can see data about individual recorded meteors and you can also write a note to them if necessary (e.g. about speed fo the meteor, its colour, observations conditions, etc.).

Then it is necessary to connect to Internet. The data can be sent to our server by checking all the records you want to send and choosing ‘Upload selected’ option.

Collecting the data from observers

Meteor-observer application saves the observation data into the mobile’s memory first. After finishing observations, the data are sent via http push request to aggregation server, which turns them into local file entries. Files are then sent to data server. Aggregate data record could be in a form of a CSV file.

Aggregation server should at the same time provide a web page with a preview of the last recorded file.