Translations of this page?:
Trace: • graves 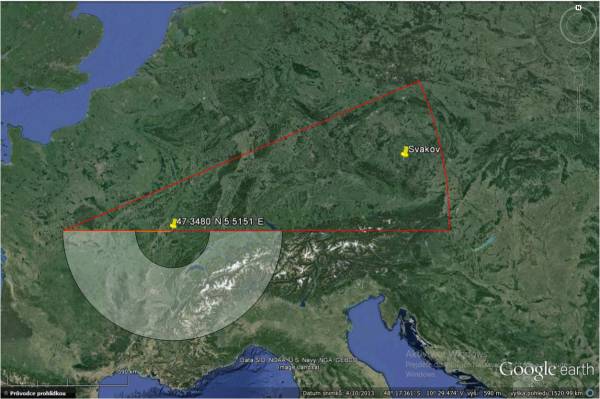 The image above shows a gray colored area which is projection of GRAVES radiation pattern to spherical surface 100km above Earth. The red triangle indicates theoretical visibility limit of reflection generated in the gray area.

The transmitting unit consist of 4 separate phased antennas arrays, each of which covers a sector of about 45 degrees in azimuth. The radar only covers the south portion of the sky, 90 to 270 degrees.

Horizontal beam has a width of 7.5 degree. Every sector is divided into 6 parts, each of which receives the transmission from the radar in the length of 1.6 second. It therefore takes 19.2 seconds to scan the whole sector and each sector is scanned 4500 times in 24 hours. All four sectors are scanned simultaneously. According to information found on the Internet the beaming angle is 25 degrees in the vertical plane. Reflections from the Moon should be (as claimed by PE1ITR monitoring) clearly audible in range from 15 to 40 degrees.

The sequence of transmission into the sectors is tied to UTC, that’s why it is possible to find out where exactly the radar transmits at a particular time. These data are available at webpage: The 143.050MHz Graves Radar a VHF Beacon for Amateur Radio