Bolidozor is open-source hardware and open-source software project which is focused on radar detection of airspace and astronomy objects. The Czech Astronomical Society partially support this project by donating a storage space for our data. We want to improve our data-mining abilities by software development supported by European Space Agency.

Bolidozor project is meteor bolide detection network equipped by several types of radio detection stations. RMDS02D and its predecessor RMDS01 is a SDR receiver system designed primarily for radio detection of meteor trails. It's advantage over other designs is a high performance software defined receiver and completely open-source design, which brings advanced signal processing of radio images for everyone. This system now has several detection stations (see the map) in the Czech Republic and Slovakia. But technically it could be extended to other European countries. 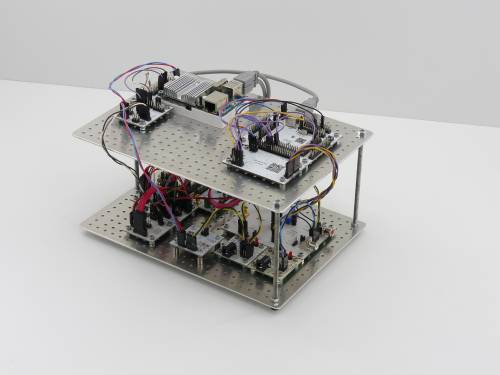 The list is ordered by task priority. There are brief description of problems and description of initial task for qualifying of you for these SOCIS tasks. If you are interested in the tasks presented here please do not hesitate to contact us at bolidozor@googlegroups.com, we will explain you a technical details.

The Bolidozor network currently has an ability to observe one meteor by multiple radio stations. The signal parameters are different to the each station. The signal differences at multiple stations could be used to obtain guess of the observed meteor trajectory.

The algorithm which allows calculation of meteor trajectory from multiple reflections is partially known. Unfortunately it is very computationally intensive even with small number of stations, therefore its redesign is needed.

A working utility which takes set of meteor reflection parameters and returns the most probable trajectory of the meteor with given reflection.

The radio meteor detection station RMDS02D could be run simultaneously in multiple instances on one site. Therefore this station has abilities for radio interferometry detection of meteor trails with use of an antenna array at observatory site. The software for computation of heading to the meteor from multiple records taken in same time with RMDS02D from two or more antennas.

The student has to create a GNUradio based interferometer which could determine the source direction of radio signal from an antenna array. The algorithm must involve noise mitigation and possible phase errors from antenna array.

With use of interferometry the direction of target object can be discovered. We intended to use multiple RAW radio meteor reflection records for determine of direction to reflection. The radio-observer application has to be extended for simultaneous recording of multiple signals from multiple radios with synchronised Local Oscillator or radio-observer's functionality must be reimplemented to the GNUradio. These two approaches can be used for calculation of correlation. Finally the direction of reflected signal will be found from antenna array phase correlation. Student helps community with acquisition of another information from meteor trails records.

The application on GNUradio schematics for GNU/Linux operating system which determine direction to the reflection from measuring station. Some limited user interaction is possible.

For further information we strongly recommend to contact the project coordinator.