Translations of this page?:
Trace: • network 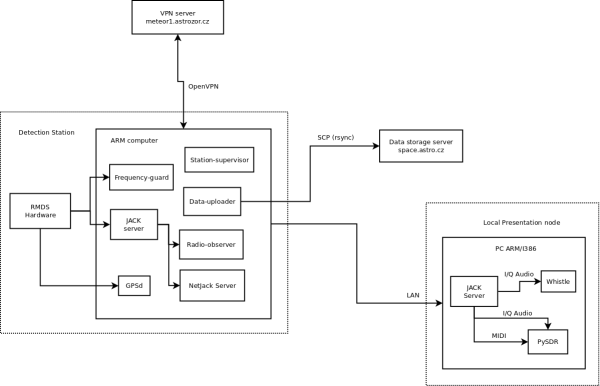 As you can see, the station is connected to network via several routs that differ in a direction of data transfer, data flow and an expected probability of failure.

Virtual private network connecting the stations via Internet is important for keeping the supervision and enabling a remote maintenance. VPN leads to one of our servers, which at the same time evaluates state of the individual stations.

Other use of VPS is in an internal communication between stations. This is important for some algorithms involved in detecting the coincidence.

A reason for restricting the data flow over VPN is to decrease the demands for data throughput of VPN server connection.

SCP carried out by data-uploader is intended for transfer of primary data to data server. In this way, measured data are uploaded. This connection requires data flows of approximately 1GB/day in the direction from station.

Local ethernet network is used by observatories to present the data obtained by the station. For example, a lecture room can be used to present an actual data stream from station together with a running waterfall and a generated sound. Data flow in this connection depends on the way and resolution of the signal sampling on the station. However, it moves in order of units of MB/s. It is necessary to have a local network in a good shape to prevent failures.

This way of station’s supervision will be used in future as a backup solution - e.g. in order to reset the station or perform a remote diagnostics in case of failure.