Translations of this page?:
Trace: • spectrumlab

This guide assumes a station’s hardware version RMDS02B - it is the last version of the station that uses SpectrumLab software to detect meteors. 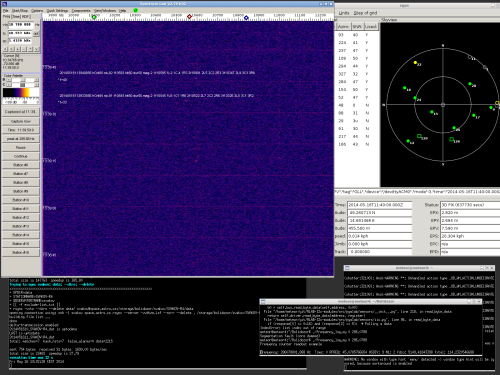 Station usually runs an Ubuntu server distribution - so far, any version from 12.04 is satisfactory. Install the Ubuntu server only with SSH server on a station.

Apart from X server and Wine, it is necessary to install the basic window manager (e.g. Openbox) and optionally a login manager (e.g. LightDM).

Install the X Window in minimal configuration on station.

Add the user, under whose account you will run SpectrumLab, to ‘audio’ group. In our case, we named the user “meteor”.

In order to set and maintain the accurate time, it is recommended to use ntpd. It can be installed under Ubuntu using:

The software allows a synchronisation of system clock to an accuracy comparable with NTP server ping time - usually around 100 ms. Such time accuracy is sufficient for most measurements. If a higher accuracy is necessary, you can use MLAB time synchronisator.

Automatic tuning of a receiver

Install the SW support of hardware version of your RMDS station. For example, according to a guide for RMDS02B.

Next, install a sofware packed for communication by I2C

Next, start the tuning utility

Other distributions are not tested. It is possible that there will be differences during installation - for example, according to a guide for hidapi package.

Download SpectrumLab from space.astro.cz (it contains the last verified version) and install it into wine. Newer version have a problem with timestamps in screenshots.

For an on-line data processing directly on the station, there is a config file that, after loading it to SpectrumLab, automatically detect meteors within the audio frequency range 10300Hz - 10900Hz. It assumes the following receiver - SDRX01B tuned in a way that the middle point of an meteor reflection is at 10600Hz.

Detection script and scripts for copying the files with records are placed in SVN repository on MLAB server. You can reach them for example by exporting a part of the database via Subversion:

Now you should see a Bolidozor folder with all the necessary files to make the detection work via SpecturmLab in you working directory as a SpectrumLab directory. The downloaded folder also contains a README.txt file with an description of how to use the scripts.

These files are updated from time to time. To download their most up-to-date version, use a following command (in a directory with the downloaded files):

Necessary modifications of the detection script

Rename the SKELETON-R1.usr file according to the name of your station and copy it into a directory where you plan to save meteor records. Edit the renamed file. It is especially important to change the name of the station so data will not be saved under a name of an already existing station. Find a SKELETON string in the file and rewrite it for the name of your station. At the same time, change the directory, where your meteor records will be saved, if you are not content with the implicit path ~/Bolidozor/.

The changes involve the following line - after the modifications it may look as follows:

Create a subdirectories ./data , ./capture , ./audio in the K_path directory.

After the first launch of SpectrumLab, open the above-mentioned file with .usr suffix and end the software. In this way, you will make sure that the loaded configuration will become implicit and the .usr file will not have to be opened next time. If you change your SpectrumLab configuration, you should write it into .usr file that is backed up on server.

If the acquired data are to have some scientific significance, it is necessary to publish the results of measurements.

Central server of the Bolidozor network

Before you begin to upload data to our server, you have to have an account created according to the following registration procedure.

After a successful registration you can run the script for data upload. It can be downloaded from MLAB Subversion database using an above-mentioned series of steps.

where the /path/to/data_folder parameter has to be changed for the path to a folder with saved data - e.g. ~/bolidozor/. Observatory_name is substituted by a name of your observatory, which you have chosen during registration - e.g. svakov.

If you create a rmob.cfg file in the station’s directory, the Bolidozor network will automatically generate histograms for RMOB network from your station. You no longer have to run rmob-export software directly on your station.

Automatic launching of SpectrumLab after logging to a graphical environment can be set using an ~/.xsession file - process described for example on Ubuntu wiki. In order to use LightDM, it is necessary to configure it.

To automatically launch SpectrumLab, it is necessary to create the ~/.xsession or~/.xinitrc file under a symbolic shortcut (?? symbolický odkaz):

After choosing ~/.xsession as a default login session (in case of LightDM it is sufficient to log in once), you can set an automatic logging in:

SpectrumLab will start automatically with turning the computer on.