Translations of this page?:
Trace: • noise_interference

This page collects various side signal and events that were recorded during the use of detection stations. If you retune a station and try to explore other radio bands, you can make use of tento seznam when trying to identify a signal. 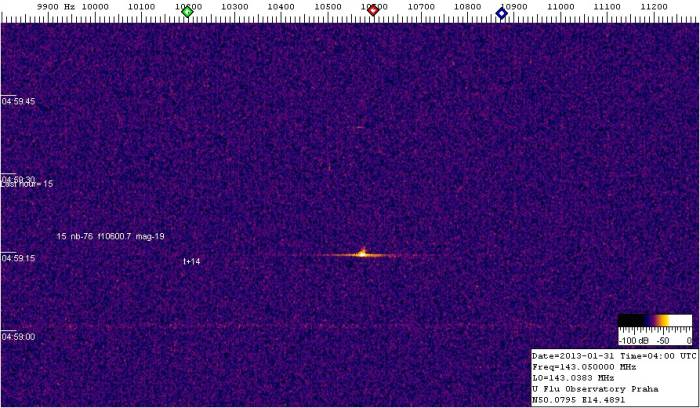 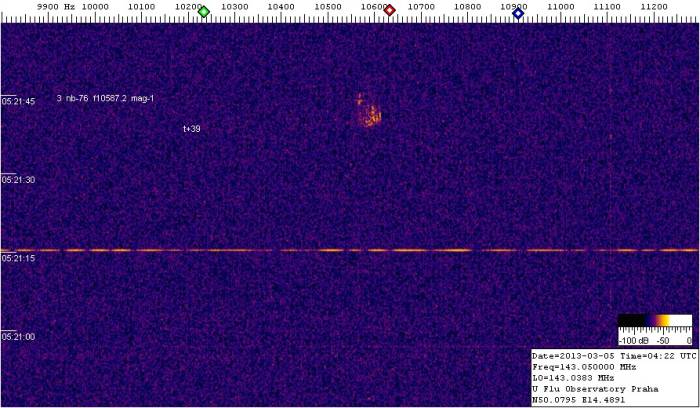 An atypical meteor without a head echo 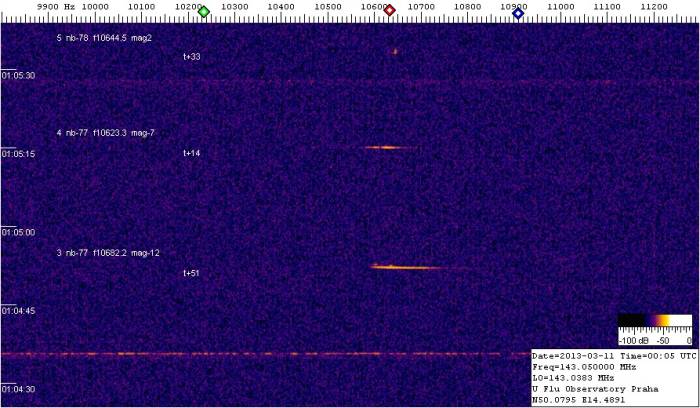 Two meteors, each with a head echo 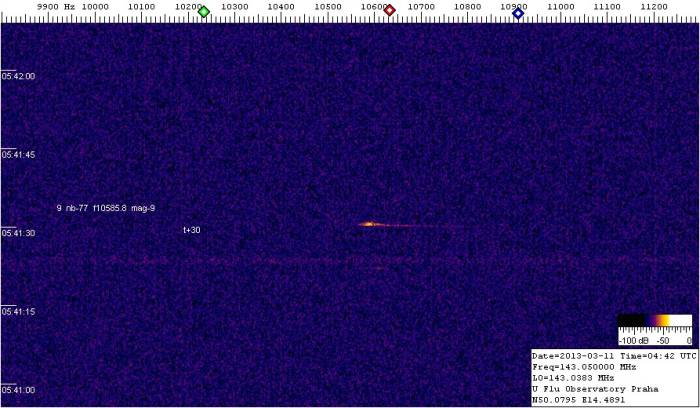 Meteor with a head echo 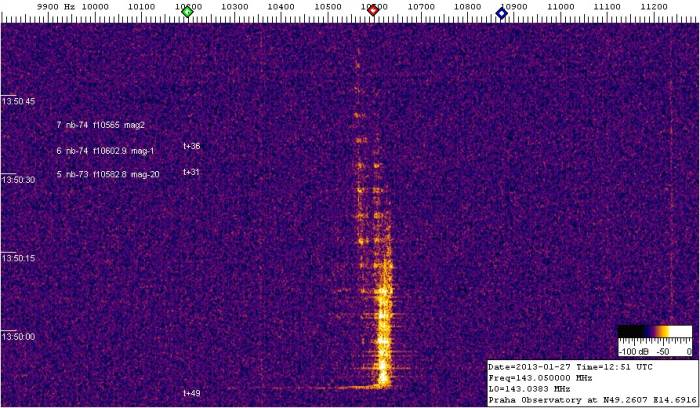 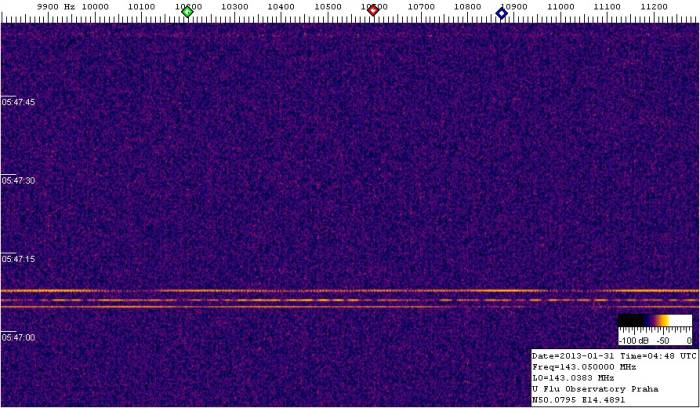 Horizontal lines are in the majority of cases results of turning on the lights (in a house or neighbourhood). 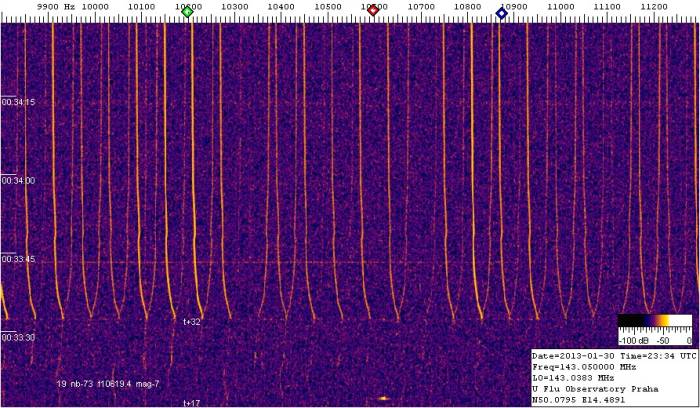 A noise caused by an HDMI cable. 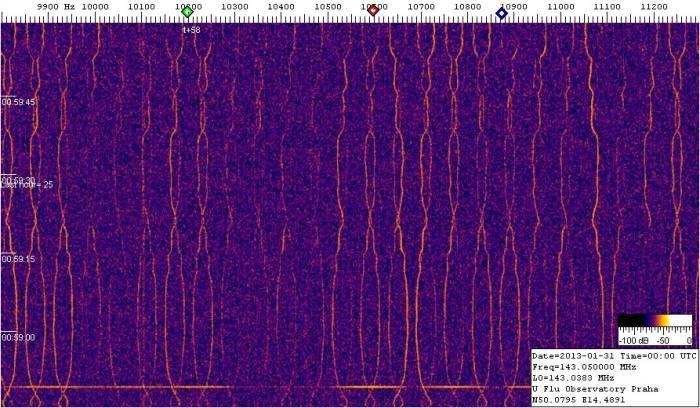 A noise caused by HDMI cable. 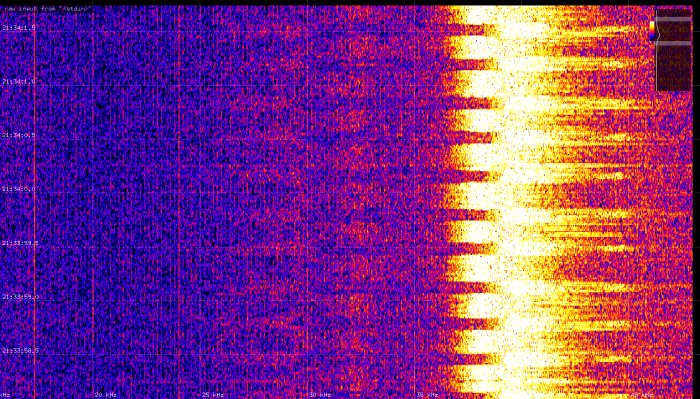 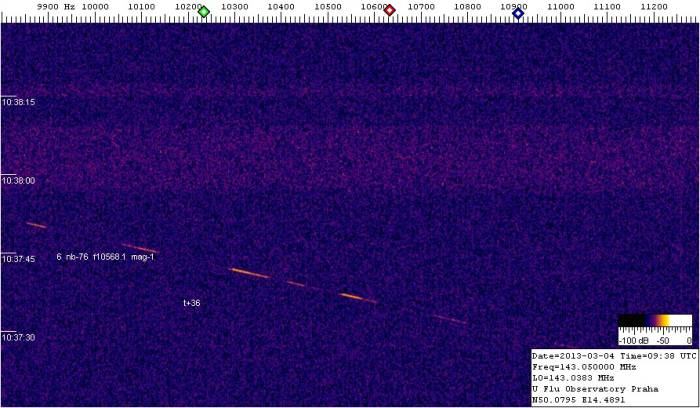 ISS or other big satellite. There are many satellites visible in GRAVES signal, as you can see on the picture processed by Center for Machine Perception ČVUT. 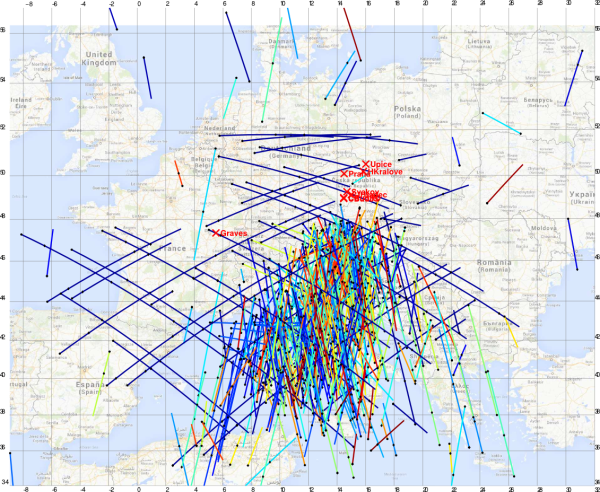 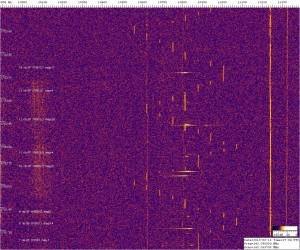 Some users experience various problem with undesirable noises during station’s operation. This chapter summarises some experiences with a commonly occurring types of interferences and gives tips for their solutions.

First, let’s see a picture of a correctly set receiver without a connected antenna and with “Creative Soundblaster USB External live!” sound card. 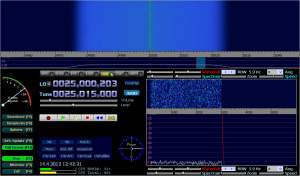 As you can see, in the middle (zero audio frequency) there is an increased signal caused by an induction by grid frequency of 50 Hz in audio cables connected to the sound card. Improving the position of cables and ground loops it is possible to lower the noise.

Next, you can see a picture where there is an antenna connected in a relatively RF clean environment. 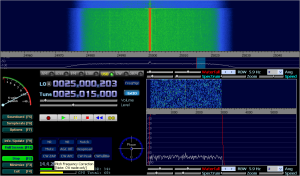 Now we get to an examples, when the environment where we operate the receiver is not so electromagnetically clean.

We will illustrate the problem on a set from the following picture - generally not a very well chosen set if you want to achieve minimal interference. Plastic notebook has a minimal attenuation of radiated energy, there are a lot of switched-mode power supplies and a lot of long and badly shielded cables. 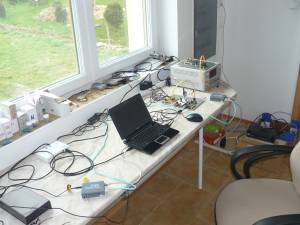 A turned on metallic Ethernet (?? Metalický ethernet) is one of the most obvious sources of interference. It is typical by its thin periodic spectral lines with a maximum density around 25MHz.

The following picture illustrates how such interference may look like: 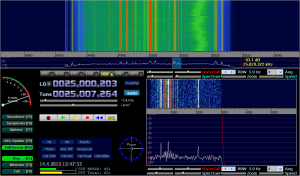 There are several solutions of this problem, however none of them is as useful as not having an Ethernet at all in the observing locality.

The classic UTP patch cables can be also obtained in shielded version STP/FTP, which reduces the radiation from the cable. 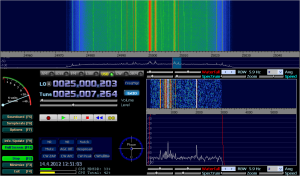 Another option is using an optical Ethernet. Unfortunately, today’s computers are not equipped with optical Ethernet ports. It is therefore necessary to use Ethernet-optics external converter. 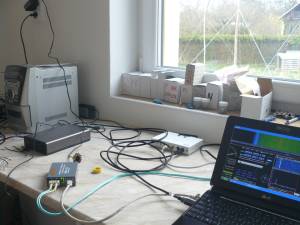 Ethernet interference spectrum will change in the following way: 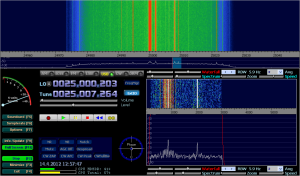 As you can see, there are still a lot of artefacts in RF signal caused by Ethernet. These are mostly caused by a transmission of a parasitic signal over the power supply cable of converter to the same socket as is the power supply of an SDR receiver.

We we connect the converter to other socket, the noise reduces significantly. 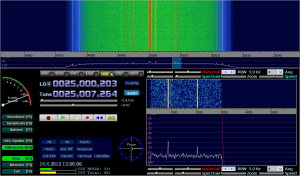 You can also fit the cable with a ferrite ring that will further prevent the transmission of RF signal over the power supply cable. 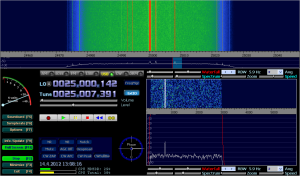 You can proceed in the same way - adding a ferrite to all the cables, separating the sockets, enclosing the receiver to a box, etc.